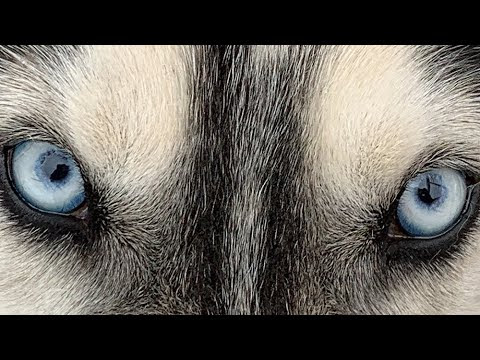 February 14, 2021 – Wine, crazy dogs from the neighborhood and airplane 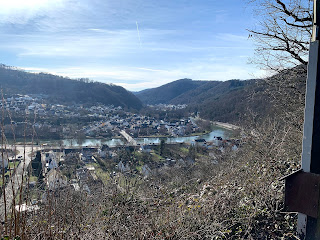 Today my mistress took Mogli and me for a walk up the hill. It was a beautiful day; the sun was shining, and it was still a little chilly. Perfect day for a senior dog to walk uphill.   It’s a nice walk up there, a small path through the trees. This used to be vineyards. Viniculture at the Lahn has a more than 800 years history and tradition. The Romans brought the wine to Mosel, Rhine and Donau. They found proof for this close to where we are. There is written evidence that there were vitaceous along in Nassau/Lahn in 1159. Nassau is just around the corner. They started growing grapes here in Fachbach around 1385. Wine was more than a beverage, in the medieval times it was a staff of life, a payment and exchange object and was used in worship. Vineyards belonged to churches, monasteries, noble lords of the manor, rich burgess and farmers. The late 16 th century and early 17 th century was the prime age of the wine culture at the Lahn. During the 30 Year’s War wine lost it
Post a Comment
Read more 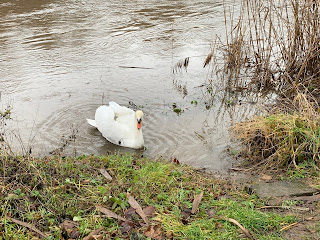 You might remember, we are living close to the river Lahn. The snow is melting, and it rained for a couple of days. Now the water level rises, and the shores are flooded.   My humans can’t walk us there as they closed the shores this afternoon. We were able to walk there in the morning though and see for ourselves.   I miss walking on the shore, there is so much to see, and the newspaper is very interesting. For those of you who haven’t read my older blogs – sniffing around is like reading the newspaper, you get all the information you need: who was here, was it male or female, small or big, old or young….   The swan does not care about the flooding all he wants is to tell us – STAY AWAY or I’ll bite you. Honestly, do you think that would make you less interesting? Au contraire – Come on let us play!
Post a Comment
Read more

January 10, 2021 – Finally snow, egg cartons and what exactly is a Husky like 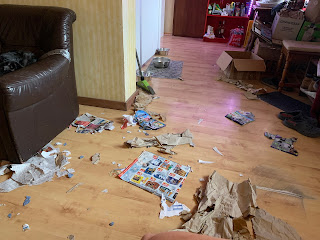 It has been snowing the last couple of days and now there is snow on the mountain. My humans took Mogli and me out there to run in the snow and enjoy. It was so much fun rolling in the snow and just running. Mogli has a different running technique than I have, well what can I say, he’s a Husky.   Speaking of Husky, I am not sure if you’re aware what it means to have a Husky in the house. Boy, I thought I am stubborn, but Mogli is the most stubborn dog I’ve ever met. My mistress tells him to do something and he’s like “mmmh, let me think ….no …. maybe I will do that next Wednesday but now I am doing something that’s more fun”.  Huskies love to destroy things. Almost all the water containers on the Husky farm were destroyed by the dogs, they chewed on their houses, and one even chewed the power cord of the central light. Luckily nothing happened. Mogli is not that bad, he tried to chew on some things in the beginning, like the bedding or pillows. When we moved to Germany, he stopped t
Post a Comment
Read more 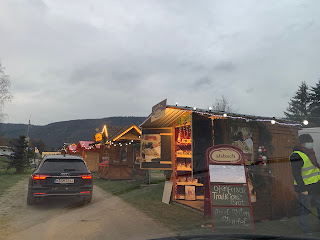 Did I ever tell you I love Christmas time? There is only one reason for that – speculaas or Spekulatius as we call them.   It’s a typical type of spiced shortcrust biscuit in some European countries. They are thin, very crunchy, caramelized, slightly browned cookies. Typically they have some image stamped on before baking. The spices in speculaas are cinnamon, nutmeg, cloves, ginger, cardamom and white pepper.     Nowadays the supermarkets start selling them on September 1 st . That gives me four months of speculaas every year. I missed them a lot when we were in the USA and Canada. My mistress got them in a Canadian supermarket once and was very happy. She bought five packages at once. Good thing she did, next time she went there they were all gone.   When we are in Germany we typically go to the Christmas Market in Frankfurt. This year the Christmas market was canceled because of that virus everybody is talking about. But this little town of Fachbach organized a drive-thru C
Post a Comment
Read more

November 6, 2020 – Why would you treat people bad if you want them to move to your town

July 21, 2021
It’s almost 4 months now that we arrived in Fachbach. My humans like it here and it seems like we are staying for a while longer. Me personally, I think it’s a good place but a miss a big, fenced area where I can run without being called back.   There is just one problem to feel really welcomed here – the major. If I would be major of a town, I would make new people in town feel welcome. I wouldn’t give them a hard time because they have dogs, and I wouldn’t make them to rush the decision of moving to receive taxes and fees. As some of my foreign followers might not know I will explain to you how moving works here in Germany. Believe me, of what I have heard humans talking there is way too much bureaucracy here.   When you live in a town or city you must go to city hall, and they must write in their books that you are a citizen of that town, and your ID card must be changed to your new address. Nowadays you even must bring the acknowledgement of your landlord when you get regi
Post a Comment
Read more 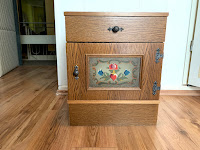 My mistress is busy painting walls, doors, ceilings and furniture. Because my humans do “Living for work” they help around the house wherever help is needed. So, my mistress goes painting a few hours every day whereas my master does other things. I can’t smell much chemics when my mistress comes back after doing paint jobs. She uses chalk colors. In the pictures you can see some things she did.   After my humans finish their work around here, they work on their software or walk us dogs. Sometimes we walk up the hill to the big cross or to the little cratory. Other times we drive to the woods or to the field on top of one of the hills. Mogli and I can run free there. We both love running free but I get tired easily. I have to admit I am getting older and calmer, whereas that young fellow Mogli never gets tired. He is having so much fun when he is running. Too much fun, sometimes he runs me over or jumps over me because he can’t stop on time.   Last week my mistress took Mogli
Post a Comment
Read more
More posts